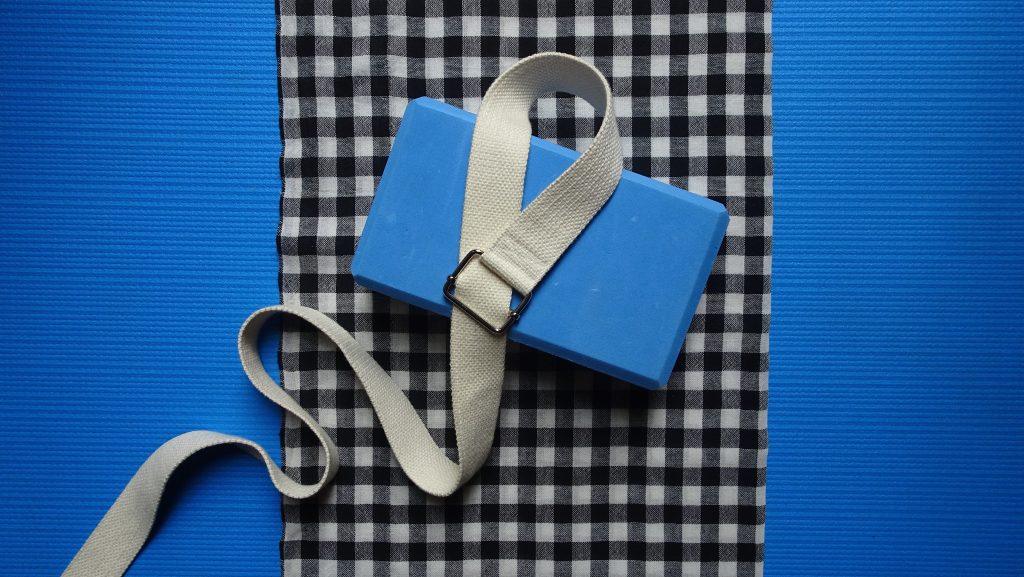 I confess. The resistance/surrender duality is alive in me. The dictionary definitions of surrender are: ‘Stop resisting to an enemy or opponent and submit to their authority’, and ‘Give in to a powerful emotion or influence’. In yoga practice, I experience both. I’m reminded of the Balinese checked fabric poleng—black squares against white—a metaphor for life’s many dualities which at its best, symbolises the balance of the universe.

It was a pleasure, after returning to yoga last year, to move to a teacher’s voice like a marionette on strings—a willing surrender to both the higher authority of her status and to her expertise. Each sweet, hour-long interlude was freedom from responsibility; I watched, listened and did. Then, with more complex poses, resistance crept in. Did I need to stretch that far, or stay in a pose that long? Weeks passed. I overcame petulant resistance, and most of the time found grown-up levels of surrender.

Reaching Samadhi (the ego-less state of oneness with all that’s infinite in the universe)—means practising Patanjali’s yoga sutra 1.23, Ishvara pranidhana (to dedicate, devote, or surrender to a supreme or personal God). It’s demanding for mere mortals, but we can begin via the layers of surrender in yoga practice, both on the mat, and before we get to it.

“I first learned the concept of surrender as a student. So when I had a sore neck, or a sore back or a sore shoulder, I worked out how could I surrender to the class and to instructions as opposed to staying with my own resistance.”

“Surrender also applies in practice—having the presence of mind to let go and be in your practice and be open to what comes up. So you might start a practice with something in mind, like I’m working on my shoulder, but actually you discover something about your hip and knee, and maybe you let go of the preconceived plan you have for the practice, because something infinitely more interesting will come up than the wooden plan you had for either your practice or even for the class.”

“When I’m teaching, I often have a plan I’ve written down and something will come up. Today you had a sore shoulder, Andrea couldn’t do something because of her neck, Nicole had an injury, there could have been someone menstruating or pregnant that I didn’t know about, and so it’s about going with the flow, you have to surrender to it.”

Shayna’s interpretation of Ishvara pranidhana, is a surrender to the universal energy that exists in everyone, and that connects everyone in some way, as opposed to surrendering to an omnipotent force. I asked her about how she experiences surrender now, personally, as an experienced yoga teacher facing a class.

“It changes with age and your practice, with experience and understanding. I’ve become more empathetic and open to the idea that not everyone can ‘do’. People do age and have injuries, and they don’t have the same drive I have. When I first taught, I used to find it really difficult, especially with 25-year-olds. I’d think, ‘What’s wrong with them? They’re all snowflakes’. I’ve had conversations with other teachers and finally realised that not everyone wants to practise with the burning zeal of wanting to be a teacher. They just want to practise to feel better and change their lives a little. And that is okay. So part of it is acknowledging that and not driving the class too hard.”

Despite yoga improving my flexibility, balance, and strength, bits of me still twinge with pain in every yoga session; part of surrender for me is accepting what comes with an ageing body. Had Shayna needed to surrender to changes in her body?

“When I was younger, I didn’t have any pain in any joints. It’s just recently that pain is coming. So rather than work at it mechanically, I no longer force my way through, because it actually makes it more painful. Today, I don’t know if you noticed, when I was on the stage, I was working with standing on the diagonal. For myself, if I step one foot forward, one foot back, it really sucks my hip socket and buttock bone deep into the side and then there’s no pain and the groin feels soft—as it should. So it means that I’m surrendering to age, and to menopause and I have to take the time and effort to explore how I have to change my practice to support that, which may mean using more props, it may mean setting up differently on the mat in terms of alignment, that sort of thing. And once you’re in that, you surrender and finally you’ll get a bliss point. There were a couple of times when I did touch on that today—I could have stayed in Trikonasana forever! And that really is surrender. There’re all these other interpretations, but a true surrender takes you to bliss. You surrender to quietness, just as you do in Savasana. ‘Surrender to the floor’, Geeta will often say, ‘to Mother Earth’. Giving over and letting the nervous system let go and stop is part of surrender as well.”

I asked Shayna to say more about the layer of surrender she’d touched on when she mentioned that BIY teachers had surrendered to the recognition that people had pain and stiffness, and that pushing them too hard wasn’t helpful.

“Well, it’s actually been healthier for the school for us to not drive students so hard, to acknowledge that they have limitations, to surrender to knowing that their drive and commitment and willpower is not the same as ours. We want to make a career of it, and most students don’t. And therefore we teach accordingly. These days, the average age of students coming to the studio is older than it once was, so people come with pre-existing conditions that we need to deal with. It is our job to manage and accommodate their needs—we can’t brush over them or cast the problems aside by ignoring them. We have to engage with the needs of each student in the same way that as practitioners we have to engage with the subject of yoga in our practice—the asana, our body, our breath, our mind. Not just doing mechanically. Then there is complete immersion in the subject and at that point comes surrender.”

“Driving students is a fine balance, because they do need to be driven. In the backbends, someone has to bark, to yell, to get them up there. As Geeta Iyengar once said, ’Who’s going to do the yelling? Are students going to yell at themselves?’ But it’s a fine line knowing when to stop yelling, knowing when to stop adjusting, to stop asking for more. And I’m the first to admit I’ve made mistakes doing that, that I didn’t always read the class so well. That is experience. Having the skill to read the class—its energy level, capability, ability to receive more information that will go in—is something a teacher develops with experience. In the same way that practice evolves, teaching evolves. These days I can read a class much better, but reading a class, as opposed to an individual person, is not so easy. Maybe 80% of the class is travelling well but it’s your job to look after 100% of the class.” As Shayna does so well.

In the quest for balance in yoga and in life, there are endless humbling and enlightening adjustments and reckonings—Shayna’s candour about her experiences with surrender remind us that nothing is ever ‘one and done’.