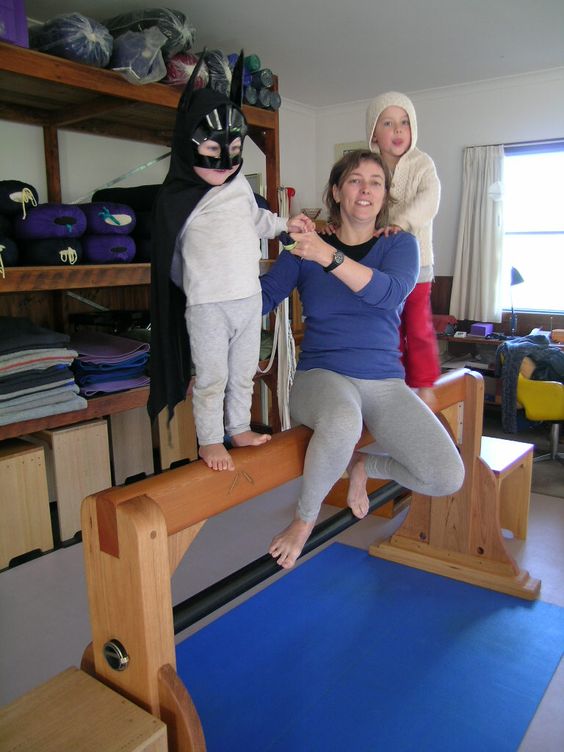 I am the mother of two delightful boys. They are two and a half and four and a half, as the older one regularly announces to anyone we meet. I am a yoga teacher with a small school in country Victoria.

I have had three full-term, healthy pregnancies, three caesarean births, but only two live babies. Returning to yoga after each birth was a remarkable journey. Each journey different and provided the opportunity for growth and yoga learning.

Amos was born by emergency caesarean section after a short labour. He did not draw breath. His umbilical cord was prolapsed (below his head) and the cord became crushed between his skull and my pelvis. The cord blood supply was cut off and he died during labour. I was heartbroken. It was the saddest time of my entire life.

I referred to Geeta Iyengar’s A Gem for Women for advice about returning to practice after pregnancy. The guidelines for caesarean birth stipulate, rightfully, that one must recommence practice with lying Pranayama for two months to allow the wound to heal before resuming asana practice. I tried to do as prescribed. The book does not give advice for return to practice after the death of a baby.

Whilst I practiced Pranayama almost daily all through this pregnancy, I found I could not do it now. I was too sad. I cried roughly all day every day for three months. I could manage to pull myself together for about ten minute intervals to deal with the business of say, paying at the counter of a shop, then resume crying. Pranayama was not possible. I would lie over a bolster to begin Savasana and cry. I could not concentrate. Rather than being able to visualise the expanse of my internal chest, images of my dead baby kept filling my vision. When I tried Pranayama, the crying would become deep sobbing. One cannot breathe deeply, smoothly and sob at the same time. It feels as if you are choking.

I was drowning in sorrow. I was inconsolable and yet I did not want to be consoled. I felt I was going mad with grief. All grief has its own path and duration. I did not want or need to hurry grief along although I needed a daily break from the heaviness of grief. I simply could not adhere to Geeta’s guidelines. I needed something uplifting, hope giving. I needed something to help me through the grief, but not to shorten it. I wanted yoga asanas to help me feel good again, if only for a short while.

Although I was grief struck I was amazed at my seemingly remarkable physical recovery. My emotional recovery took a good 18 months to two years, but my body seemed to come back in months.

For the first week, my breasts were swollen and sore, engorged with milk and no baby to feed. I started supine poses (Supta Baddha Konasana, Setu Bandha Sarvanagasana) over a half folded blanket or a flat pillow whilst still in the hospital to give relief to my aching breasts. I increased the height to one bolster over 2 weeks. I added Dwi Pada Viparita Dandasana over flat x-cross bolsters after about two weeks. At about four weeks I started Urdhva Hastasana, half Uttanasana to the wall and Dwi Pada Viparita Dandasana over a chair, feet supported to the wall. Asanas in this way provided immediate relief from crying. I did Savasana with eyes open. After roughly eight weeks, I tried Pranayama for one cycle, followed by eyes open and normal breathing for a few cycles. Sitting in cross leg for Pranayama was easier because I was able to concentrate for a few more minutes before being overwhelmed by grief again.

Forward bends made me feel depressed, even agitated. I could not keep my head down. (And yet previously I had enjoyed forward bends). I did them with the spine concave, head up. I avoided full forward bends for about 6 months. Inversions made me feel happy. I could smile briefly. I started Sarvangasana after a month, using a chair for the feet in Halasana. Returning to Sarvangasana was like coming home. I embraced it. I started Sirsasana two weeks later and smiled. After three months I resumed baby backbends and smiled more. Practicing asanas was like pressing the ‘pause’ button on grief. I resumed teaching. By five months, my practice was back to normal and I determined to go for assessment for JI1 in 9 months. I was successful.

It wasn’t that I wanted to hasten the process of sorrow. The sorrow needed to stay until it was ready to leave. But sorrow is exhausting. It can be debilitating. It can render you temporarily dysfunctional. I needed a rest each day from sorrow. I needed to be able to function normally for a short time each day. Asanas provided that.

As it turned out, when I presented for assessment at JI1, I was just pregnant with my second baby. During the assessment I was wondering the whole time whether or not I was having pregnancy symptoms or was it wishful thinking. I was understandably anxious during this pregnancy and was mindful to practice Pranayama and asana daily.

Happily and to my greatest relief, my baby was born alive and healthy, again by caesarean section.

This time, the return to practice was different. I was busy. I had a baby to care for and no overwhelming sorrow to nurse. It was easier to adhere to the guidelines.

I started practice on day 2 whilst still in hospital by lying over a flat pillow. I hung my head and shoulders over the edge of the bed to open my chest and relieve my swollen breasts. I remember a nurse coming in and saying “You wouldn’t be doing that if you had a Caesar!”.  Ummm, well actually I’ve just had one…

My return to asana practice was slower than my first pregnancy. Whilst I was joyous and happy, I was also anxious that my new baby might die at any moment (though he was perfectly healthy). When you’ve lost one, you’re ever fearful of losing another. I kept myself awake at night to make sure I could hear him breathe. That was the beginning of my night time Pranayama practice.

After breast feeding during the night and putting Tulley back to bed, I found it was a good time for Pranayama. I kept the lights off. It was quiet. It was peaceful. My partner and baby were asleep. My time was my own again. I did sitting Pranayama for about 30 minutes. I crept back to bed for Savasana and to succumb to sleep. I slept deeply and soundly until the next breast feed about 5am.

Initially, I managed to maintain a daily practice during Tulley’s day sleeps, usually twice a day. I did standing poses during the morning sleep time and inversions and restorative asanas during the afternoon sleep time. I craved forward bends with the head supported. Most often Tulley awoke before I finished practice. Then I would do Savasana and breast feed at the same time. This was not always effective for me but Tulley did not mind it. He did not like it if I tried to practice Pranayama and breastfeed simultaneously. As the chest expands, rises and falls it interferes with baby’s attachment to the breast. I continued Pranayama in the middle of the night.

Since my partner was building our house, I was earning our money and so I resumed teaching at twelve weeks.

The difficulty with practicing each time the baby sleeps is that nothing else gets done. At some stage, the yoga practice had to be given up to make time for (the drudgery of) washing, cooking etc. Practice became more difficult to achieve when he dropped down to one sleep a day.

With my third baby, I watched the operation on the big screen. The operating theatre was equipped with a camera in the light over the operating table. I asked for my birth to be filmed and shown on the screen inside the theatre so I could watch. It was fascinating. Slice the abdomen open along the previous scar; wade down through the fat layer, peel the empty bladder back to expose the bulging uterus, cut there, and pull out Frey.

As with the first two births, I recommenced practice with supine poses over flat pillows in hospital. I recommenced asanas as with Tulley’s birth. Although it was around this time that Tulley gave up his day sleep. When Frey slept during the day, I gave my time to Tulley and could not practice asana during the day.

I tried to eat a big lunch and small or no dinner so I could practice after both children went to bed and before the first night breast feed. I continued with my night time Pranayama regime in keeping with breast feeding times.

I am usually woken every night by one child or another climbing into our bed. There is not much room when my bolster is there as well. I still do Pranayama at night, often with a child’s head lying in the crook of one arm or draped over a thigh if I am sitting. It is lopsided. It makes my breath channel to one side of my chest more than the other. But it is partially effective. It is not possible to get irritable and cranky with children even with lopsided Pranayama. It is better than not doing it at all.

I teach 9 classes per week. My children no longer sleep during the day. I haven’t worked out method to practice when they are around. Whenever my yoga mat makes an appearance they jump all over me and it turns into romping roley poley on the floor. Its fun. But its not yoga practice. I am lucky enough to have child care for three days per week and these are my main practice days. One night a week I practice after class when I get home (9 -10.30pm).

I crave more time for practice but cannot find a way to fit it in. My children wake at 6am. I refuse to get up at 4.30am to practice before they wake. It is better to do it after they go to bed.

Posted in Medical Conditions, Pregnancy
The Importance of Practice and Being Earnest →
Scroll To Top