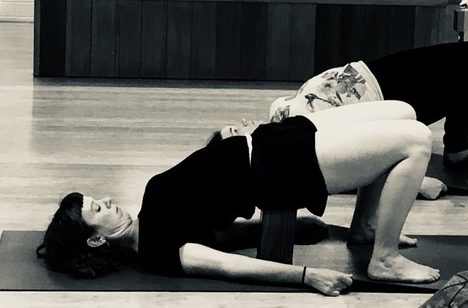 About 6 months ago Shayna asked if anyone in class would write a blog about their yoga experience. I thought there’s a challenge, that’s something I wouldn’t do. So the seed was planted and as I sat in my bed sick all weekend with tissues stuck up my nose I decided to give it a go. Turns out I had quite a bit to say…

When I was about 19 I first “did” my neck when I was in a car that stopped suddenly (maybe mild whiplash).  I now know it is called a wry neck and have had this problem for the last 20 years with at least two or three wry necks a year. I remember once I ended up on the floor after sneezing, unable to move (how ridiculous)… I did physio, massage, acupuncture, I purchased an inverter that I used once…I even had an x-ray ( I was sure I had an extra bone in my neck, especially when the radiographer commented on my unusually long neck. I never followed up on that x-ray so assumed it was normal). All of these things helped and eventually it would get better, until the next time. I also suffered from lower back pain and couldn’t stand for long…also a long term problem, I remember seeing a lot of live music when I was younger where I had to squat down or find a wall to lean on, as my back was so sore. Recently I stood at a gig for two hours with no pain at all!

I have done yoga classes on and off (more off than on) for over 20 years, the first classes when I was 18 done at the old BRACE with teachers from Rocklyn Ashram. I went to other yoga studios and gyms in various towns for brief periods. I did classes with Shayna at Peace and Quiet about 8 years ago once a week when I had very small children. I would always feel very sore after Shaynas classes and then just as I was feeling better the class would be on again… and I began to dread it. I now think this had a LOT to do with my ego and pushing through and not listening to my body and not talking to Shayna about it. I thought I could do everything….I’d be ok, it was just because I was unfit (almost like I deserved it).

So I stopped going to classes. Then suddenly I turned 40 and thought if I don’t do something I’m going to be a hunched back old lady in a neck brace. I was committed to changing.

So I joined the beginners course and went as often as I could, usually 3-4 tomes a week. I was cautious and careful and I barely held my arms out and did most standing poses with my hands on my hips. I grew stronger and I kept going. I then moved to transition to level 1 and I stayed here for about a year. I slowly began to use my arms after about 6 months, but I would still rest when I felt the tightening then try again. Yoga didn’t get easier (it’s still not easy), it was always challenging but slowly I felt…different.

Apart from feeling physical benefits (flexibility and strength) I also found that other benefit of yoga that you hear people talk about. I realised when I went to yoga I didn’t think of anything but what I was doing, and this is still what happens. I am completely in the present…I’m not thinking about anything or anyone else (hurrah!)…I’m pulling up my thighs, lifting my hips, sacrum in and up, don’t forget to breathe, spreading my toes….I think this is where Iyengar yoga may differ to other yoga, there’s such precision and focus on correct alignment, the style of teaching leaves no room for wandering minds.

I now think about yoga ALL the time. If I could go to daily classes I would. I still haven’t managed to maintain a consistent home practice but I am working on it (school holidays are my best home practice times)…I just can’t seem to quieten my brain the way I can in class…but I have realised this yoga thing takes time and is ongoing, and I try to remind myself to be kind to myself.

Yoga has also helped me to face some difficult things in myself and make changes in my life – I remember in one class when I lay down over the bolster I just burst into tears, I got up and almost ran out the door but Shayna encouraged me to give it another 15 minutes, I did and stayed the whole class and felt so much better…. In another class (backbends of course) I sobbed uncontrollably and had to lie still on the floor until it passed. This was confronting and embarrassing for someone who doesn’t cry often, let alone in public. So I cursed yoga…and I loved yoga for having this deep effect on me. Something must have shifted along the way in my practice that was noticeable to others as I had a couple of people comment to me “I can see you’re really loving your yoga”. And “you are in the zone”. In the first year I made myself go (after a barrage of mind games..I’m sooo tired, I could go tomorrow) and now I just can’t wait for a class, and try to work out how I can do more (yes yes I know I can always do home practice).

I have only “done” my neck once in the past 2 years and that was because the old ego popped up during a class and I attempted something that was silly and I wasn’t ready for (shoulder stand with arms on the floor over head). I chastised myself for a few days and then moved on and learnt from it. I’m sure I’ll make mistakes again but I am more cautious. I now know my body more and listen to it…if I have tight shoulders (usually stress induced) and they and my neck are feeling edgy I will do modified versions such as chair sarvangasana (shoulder stand) or hanging in the ropes (instead of sirsasana – headstand). I’m not sure I’ll ever be able to hold a Sirasana for long and I’m ok with that. I’m not ok with not being able to kick up to handstand yet but again I know this is because I don’t practise it at home so how is it going to magically happen?

I wish I had have taken some of those progression shots you see on instagram, because my body has changed. My posture has improved, my calves have become more slender and my arms can now go beside my ears where I could barely hold them up! Just sitting crossed legged and raising my arms used to be torture.

I was used for a demonstration for Virabhadrasana I  in a class recently…that was a moment when I realised how far I’d progressed. This was my nemesis pose. I couldn’t lift my arms for the first year, my lower back screamed, my middle back screamed and my shoulders just said no….but as I learnt to lift my hips at the front, extend from my waist, up through my ribs and chest ….reach…I grew and now I don’t cry on the inside when I hear the name mentioned. I still have much work to do and there is no end goal, just constant improvement.

Another thing I realised recently was that when the teachers talk about watching the breath during savasana (corpse pose) I can observe it without changing it (but not always). In the first year and a half whenever they mentioned your breathing my breathing would become irregular and change. I just wanted them to stop talking about it because it made it become irregular! What do you mean observe your breath without changing it?? If you didn’t mention it I’d be fine!

Last week Shayna was talking about inhalations and exhalations and I realised I could listen and watch my breath without changing it! I still struggle with savasana and the thoughts start creeping back in about what’s next (shopping, kids, life etc) but sometimes, like last week I have moments where I can watch my breath, moments of stillness.

Yoga now has me and I’m not letting go, and I am wanting to know more about the philosophy of Iyengar yoga. I’m still very much at the beginning.

I’m not a professional writer (can you tell?!). I would never in a million years  have written something that others would read (and not sure at this stage of writing whether I’ll be brave enough to go through with this), but I’ve kind of reached a stage of who gives a f@#*!

I have always been a people pleaser, a peacemaker, and just want to be liked (yeah still just want that) but I’m not as concerned about what people think about me because I feel stronger than I ever have (mentally and physically)..whats the worst that can happen?

I know I enjoy reading others peoples stories so maybe someone will enjoy reading mine and it may even give those just beginning yoga some patience, that you will see and feel changes, but it takes time (a long time) and it takes commitment. It’s totally worth it.

Thanks to Shayna, Cara, Glenys, Annshar and Candace (I miss her) for your teachings, I have learnt and continue to learn from you all.  You are all wonderful.