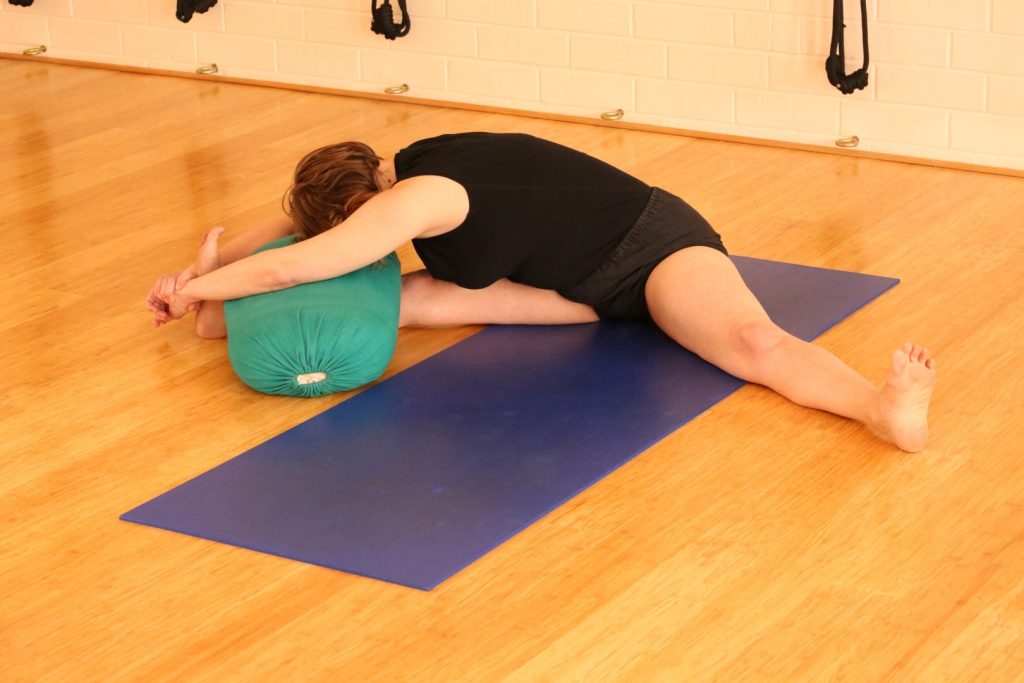 An Iyengar yoga teacher will usually enquire as to who is menstruating each class. For some people this can be an awkward or embarrassing question. It is not meant to be.

In yoga, it is advised that menstruating women practise a sequence specific to their condition rather than join in with the general class. This is because the body and mind are in a different state at this time. The body is directing its energy to shedding the lining of the uterus. This causes many women to feel physically uncomfortable, suffering abdominal cramping, back ache, breast swelling and tenderness and generally feeling fatigued and depleted. The brain may feel as though it is vibrating or throbbing and the woman may  feel irritable and emotional.

Correct practice of menstruation sequence can help to alleviate all of these conditions. As Geeta Iyengar says “from the day menstruation begins until the day it ends … one should stick to the practice of those asanas that do not obstruct the menstrual flow and help a woman keep herself healthy. Only the asanas have to be done which do not make her run out of energy or bring any hormonal disturbance.”

Poses which should not be performed during menstruation:

All inversions are contraindicated during menstruation – meaning, they should not be done until menstruation is over. This is because the lining of the uterus is meant to come out of the body as waste material and not retained. According to BKS Iyengar, in Ayurveda, “whatever has to be thrown out should be thrown out and not retained or held in. You cannot hold urine, faeces, phlegm, mucus etc. inside, as they are substances that have to be thrown out. These are called as mala -the waste, which need to be excreted. They invite diseases if they are retained.”
Inversions will check or slow down the flow of this waste material from the body. If inversions are done regularly during menstruation, particularly over the longer term, it could compromise menstruation and reproductive health possibly leading to conditions such as fibroids, cysts, endometriosis or even cancer.

Similarly, any poses that tighten or constrict the abdomen should not be done during menstruation. This group of poses includes abdominal asanas, closed twists, ‘body knottings’ (leg behind the head poses), unsupported backbends and hand balancing poses. These poses will only harden the abdomen and the reproductive organs and bring heat into the body. The effect is to increase or worsen the symptoms such as cramping, aggravate the nervous system creating irritability and increase the duration of the menses. When the reproductive organs are repeatedly hardened over the years by continuing to practise the poses during menstruation (or continuing any strenuous exercise during menstruation such as running, cycling, gym work, boot camp etc) it could contribute to adverse outcomes for menstruation and reproductive health as listed above.

Anecdotally, it is estimated that about 30% of women have poor menstruation health. Poor menstruation health means having a menstruation cycle that is not normal including: excess or heavy bleeding, scanty bleeding, absence of menses, bleeding for more than 10 days, irregular menses or painful periods. If this is the case for you, talk to your teacher about it. It is possible to prescribe a practice sequence specific to each person that may improve your menstruation and reproductive health. The practice needs to attend to the non menstruating days as well as the days of menses.

During the first one or two days of the menses cycle, the symptoms are usually worse. The practice sequence for these days should be restful, involving supported supine postures, supported forward bends, supported alternatives to inversions over benches or bolsters followed by savasana. When followed correctly and the asanas are held for the requisite time, this sequence can really relieve all of the symptoms. The groins are softened which reduces abdominal cramping. The legs are rested which quietens the brain. The nervous system is soothed and cooled. The poses are restful and the woman feels restored at the completion of the sequence.

As the menstruation flow lightens, usually from days three to five, the student may wish to reintroduce supported standing poses against the trestle. The purpose of using the trestler is to give the student support when doing the asanas and to ensure that the chest and abdomen are opened. The trestler is also used for the same purpose for other students who may not be menstruating but are feeling weak or have an injury or ailment such that their practice is improved by using the trestler.

During classes, the teacher usually asks the menstruating women to be near the stage so that specific instructions can be directed to them regarding the use of the trestler for standing poses, the use of props for support and timing in poses

These two sequences are included below.

Practice for the rest of the month

During the days of non- menstruation a woman can continue a regular practise of all the asana groups (standing poses, forward, bends, backbends, twists, abdominal poses and inversions). If all of the groups are practised, including the forward bend and hip work such as padmasana, coupled with correct practice during menstruation, this can lead to an overall improvement in menstruation health, including shortened periods, painless periods and making the menstruation cycle regular.

So, during your next menstruation cycle, take the time to look after yourself and practice correctly. Inform the teacher of your condition during class. Attend to your specific needs during this time by practising the sequences given below. Let us know how it goes – whether or not you feel better or different and whether your cycle changes or improves over time.

Sequence for Days 3 – end or menstruation

Are you thinking about starting yoga classes or changing to a different yoga studio? At Ballarat Iyengar Yoga we have classes for a range of abilities – we regularly have special deals on our introductory beginner yoga classes as well as discounts for people who sign up to regular yoga classes by direct debit. Take a look here for our full class timetable.