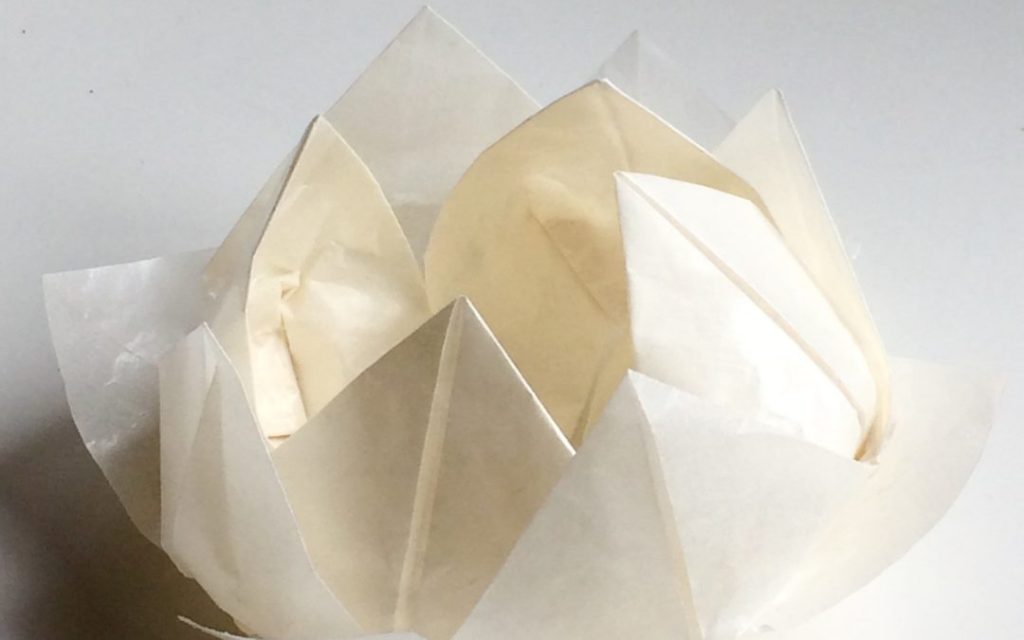 In February 2017 I came home to yoga after decades away. After almost a year, I’ve discovered that my body is using two memory systems. Let me tell you how I experience them.

Picture a sheet of artist’s paper. Fine, smooth, fit for purpose. But when creased, crumpled or rolled, restoring it to a flawless state verges on impossible. Because paper remembers. Just as each body remembers and carries the effects of what’s happened to it—whether through years of deliberate or unwitting repetitive actions, injuries, inherited conditions, or illness.

On day one, as I stowed my shoes in a pigeonhole at the top of the Ballarat Iyengar Yoga studio’s stairs—I reflected that my body wasn’t as supple as when I’d last practised yoga in my 20s. Then, when it was ‘fit for purpose’, any asana was possible. Now, like paper, my body bears time’s marks and traces—it remembers.

I may have appeared fit—but with surgically corrected knees after years of running, reconstructed shoulders thanks to lifting weights, a stiff neck as the legacy of a car accident, and aches in more joints than I care to admit—I wondered about the capacities of my older body. In a room full of friendly looking strangers of all shapes and sizes, I was about to find out.

The first pose looked relaxing—lying back on a bolster, legs crossed, arms to the side—a piece of cake. So I thought. Until I lowered my knees—the left one stayed higher than the right and my left hip howled. How was that possible? An assisting teacher read my agonised face and hurried to edge supporting foam blocks under each thigh until the pain dropped from 8 on the richter scale to about 4. Oh, the relief! Others in the class were experiencing their own discomforts, and teachers quickly reassured and helped with props and modified instructions.

And so it was with all the poses we learned over the weeks and months to come—our bodies spoke to us via pain and stiffness. But there were changes. After about three months, there was little discomfort when my hips were open, and I did without blocks. I could bend backwards, sideways and forwards—further than ever before—and with more ease. I could hold poses without wobbling. Session by session, I undid the ’remembering’ of all that had happened to my body to reduce its ‘fitness for purpose’.

And that’s the gift of Iyengar yoga. The recognition that tender, habit-formed bodies—bodies that move cautiously and self-protectively—need to ease gradually into freer movement. Everyone in every class has learned body memories that at first can seem frustrating, even younger students (a consolation to we older ones!). Teachers know that, and introduce more challenging poses incrementally, supporting us with props like belts, bolsters, blocks and ropes until we can either do without them, or use them minimally.

But I found that in terms of strength and range of movement, while I could move into particular poses, the pain and discomfort that sometimes followed (because of permanent damage to my knees, shoulders, wrists and neck), could last for days. It’s not worth risking further injury in these cases, so, when required, our observant and inventive teachers work out modified poses for us, asanas that still give us some of the benefits of the original pose.

Over time then, a ‘sweet spot’ arrives for every student. A place between what may seem possible, and what’s actually possible. And it’s in this ‘sweet spot’ that another kind of body memory reappears. In Castlemaine writer Alex Miller’s novel ‘Lovesong’, a character says, “You touch a tiny memory and it opens like a flower”. Given the right circumstances, shown the right ways to move, a body too can open like a flower—to the memory of its original capacities.

When planted in good soil and given enough sunshine and rain, flowers thrive. The yoga equivalent is a comfortable, well-equipped studio, and a teacher’s careful attention to the fine detail and adjustments called for in each pose.

Early on, while easy to follow in class, the complexity of instruction could seem dizzying as I tried to recall it for home practice. But over weeks and months, I began taking pleasure in simply surrendering to class instruction. I learned to empty my mind of what to do next, and simply watched, listened and moved. Gradually, through repetition, my mind has laid down new neural pathways. And now, touched like the writer’s flower, my body moves in response by opening to many of its original capacities and regaining more of its natural movement.

So, after a year of four or five days a week of yoga practice, while my body hasn’t returned to its unblemished-sheet-of-paper state (I know every part with a limitation!), my range of movement is now gratifyingly wide compared to when I began. I have more body confidence. I’m standing taller and straighter. I’m springier, stronger, bendier, better-balanced and more alive.